Why Not Stop Giving Presents? 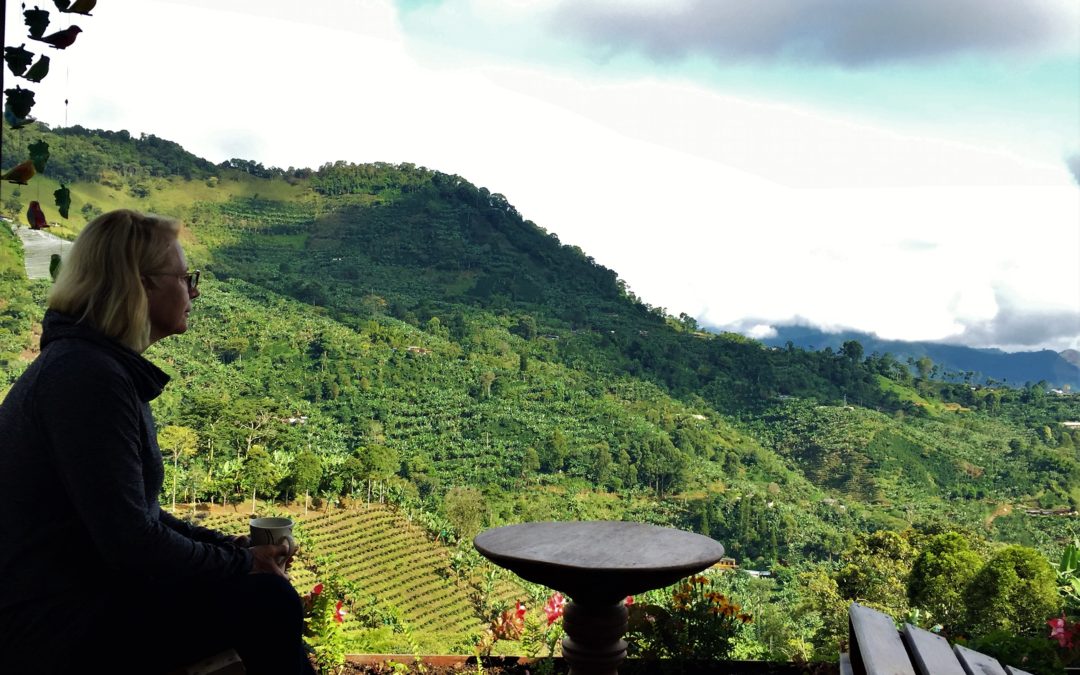 “When I give, I give myself.”
– Walt Whitman

Do not withhold good from those to whom it is due, when it is in your power to act — Proverbs 3:27

The plane lands. It taxis to the terminal and the passengers disembark. She waits in line at Immigration, passes through Customs and follows the herds of fellow travelers to Baggage Claim. She grabs her luggage and, when she finally sees me, is engulfed in a lung-crushing bear hug. My mom is in Medellin, Colombia.

The central idea for this article, the same idea that shaped the plan that brought my mom to Colombia, is not my own. But if we are honest with ourselves, very few ideas actually are. No, the credit for this particular idea belongs entirely to my dear Uncle Bob. Starts with a B. Ends with a B. Bob.

One night in the fall of 2015, over a couple of Green Man Porters (when in Asheville, North Carolina be sure to check out the Green Man Brewery) my uncle told me of a present that he and his brothers had once given each other. They had given one another the present of not having to give each other presents anymore.

Not for birthdays. Not for Christmas. Not for any reason whatsoever. They realized they had far too much “stuff.” The process of buying one another presents caused more stress for the purchaser than joy for the receiver. It was easier to not have to think about it. They are self-sufficient adults. If they really needed something, they would go out and buy it. Why make someone else waste their money guessing at what you might want?

Gift cards are a picture perfect example of how difficult it can be to shop for others. We don’t know what to buy, and don’t want to waste too much time and energy thinking about it, so we pick a store and buy a gift card. We pass along the hassle of actually making a decision right with the plastic little card.

If you think about this idea a little more, it makes complete sense. Why would you ever spend precious amounts of mental and physical energy buying something for someone that:

a. They do not REALLY need.
b. They may not want.
c. Often causes you more stress than it will pleasure for them.

As soon as I heard this idea, I was all in. I mean, have you ever tried to buy a piece of clothing for someone? I sweat when I enter department stores.

I quickly informed my immediate family members of my new present to them. They never had to buy me a present again. I work. I have money. I’m good. In turn, I would also not be buying them presents anymore.

Enter my mother. If there was ever a person who was NOT going to be on board with this idea, it is her. For my birthday, she avoided my deliberate wishes and wrote me a check. As Christmas approached, she continued to ask, “So, what do you want this year?” To which I would reply, “Nothing. No, really. I’m good.” Sure enough Christmas rolled around and there I was digging through an overstuffed stocking that my mom had prepared for me. Since I had not given her a list of specific items, I was not ripping through boxes of clothes like my sisters.

As I went through a stocking full of socks and gum and underwear and cigars, I pulled out what was for me a Christmas morning first. Cold. Hard. Cash.

I realized that it may take some time for my mother to adopt my minimalist ideals.

“This is what I would have spent on you, just keep it and buy something you like,” my mom said.

Now I wish I could say that this was my ‘ah-ha’ moment. It wasn’t. My family ate and drank our way through the next couple of days as most Americans do around the holidays. I spent the money. I’m pretty sure I bought a bottle of whiskey. Winters in Wisconsin are cold.

The idea that brought my mom to Colombia came to me a few months later, as I was contemplating what to buy her for Mother’s Day. I had to break my new gifting rule. She had put some effort into my Christmas presents. I may be a frugal minimalist, but I’m not an asshole.

Around this same time, I was also planning to move to Medellin, Colombia. The next adventure. As I thought about what my mom might like, I thought about how happy she is when we all go to her house for dinner. How she loves to come to Milwaukee to have dinner or go out for a cocktail. How she hates when I move abroad and wishes that I lived closer.

That is when it hit me. For Mother’s Day, I decided to give my mother something everyone needs more of. Time.

I created a joint-checking account for the two of us and deposited the money I was planning to spend for Mother’s Day into the account. On Mother’s Day I presented her with her account card and told her that from now on she could put any money she was planning to spend on me for birthdays or holidays into this account. I would do the same. This was our money to be used on experiences together. I alluded to the fact that I wanted her to come to Medellin but was doubtful that it would ever happen.

The more I put money into the account; the more that I committed myself to this idea; the more my mom bought in. I had often talked to her about coming to visit me, but had rarely done anything actionable to make it happen. As I put my money where my mouth was, my mom did the same. My commitment to want to spend time with her, nothing more and nothing less, inspired her to do something she might have never done previously.

One Mother’s Day, two birthdays and one Christmas later, here we are. Medellin, Colombia. The City of Eternal Spring.

My mother’s trip was a trip of firsts:

And you know what? I got to share and encourage and be a part of all of this. I got to sit in the middle of the Colombian coffee region and talk with my mom. I got to walk through some of the poorest neighborhoods in Medellin and watch her understanding and perspective of the world change before my eyes.

So, the question for this aritcle is…. Why not stop giving presents?

Everyone in unison now. Ready? 1,2,3… “Fuck Black Friday.” Forget the shoes and the phones and the TVs and the billion other pieces of commercial garbage that we are told we need but actually don’t need at all.

From 1947-1950 American author Jack Kerouac went on four spontaneous, aimless, cross-country road trips. He and his friends, inspired by a search for kicks (not shoes), women and jazz, criss-crossed the country from New York to Chicago to Denver to New Orleans to San Francisco and back again. These trips became the basis of Kerouac’s famous novel, On The Road.

During this same period of time, Tonka Trucks and Steel Pogo Sticks were two of the most popular Christmas presents. Most men wore fedoras. PEZ dispensers were all the rage. If you wanted to make a significant technological purchase, you bought a nice black and white television.

Now, if you were presented with the choice between Kerouac’s trip and the material possessions of the 1940’s, what would you choose? I I mean, in hindsight, the choice seems so obvious.

Material possessions, when viewed in hindsight, always seem ridiculous. Memories with loved ones are like wine. They only get better with time.

I remember making fishing poles out of bamboo trees with my aforementioned Uncle Bob and waking up at 4AM to go fishing. I remember spending two weeks on a houseboat with my dad in the Boundary Waters of Northern Minnesota. I remember going to New Orleans for the first time with my two of my best friends. I will never forget the two weeks I spent with my mom in Colombia.

Two years ago, right after I had returned from a long solo backpacking trip through Southeast Asia, I mentioned to my mom’s boyfriend how surprised I was at how quickly some of my memories from my trip had faded.

He said to me “The memories fade because you were by yourself. It’s different when you are with people.”

It is with this in mind that I propose a trade. Trade possessions for time. Invest your money in experiences with those that you love.

The single most important thing we have in life is time. Each day we are alive we only have less than we did the day before. The clock is literally ticking. There is no greater decision than how, and with whom, we decide to spend our time.

Stop with the presents. Start trading experiences. I guarantee you’ll never look back.