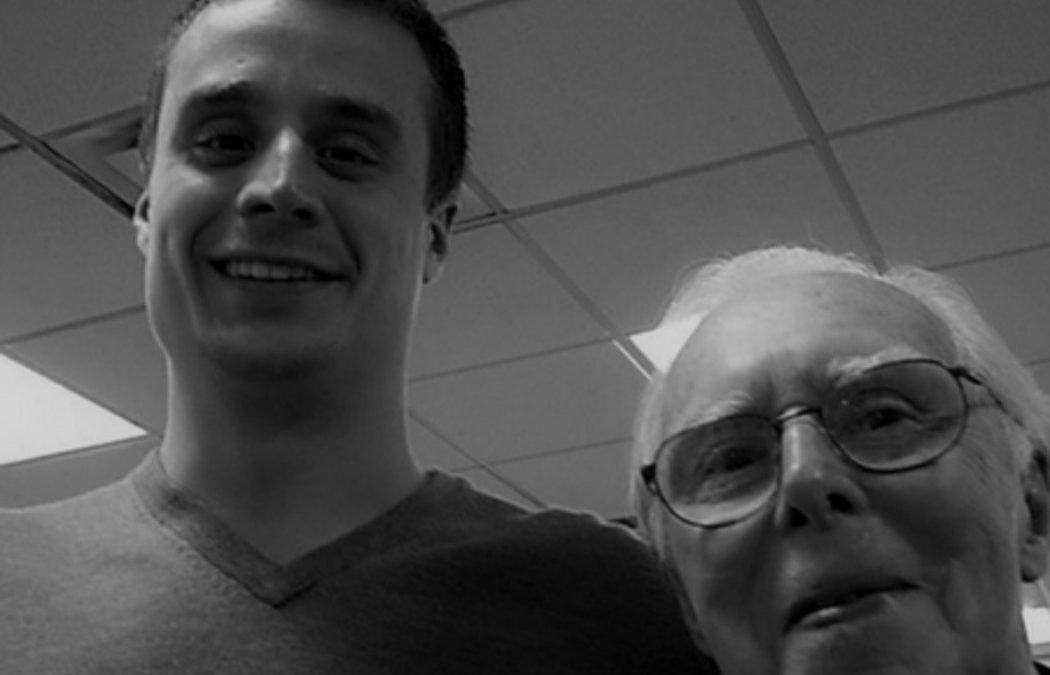 “A winner in life, not a loser in death.”

I do not say this for sympathy. It is simply a statement. To be honest, I am happy that he was able to move on. Death is what he had wanted for quite some time.

His death was not ceremonial or dramatic in any way. He was here and then he wasn’t. He started sleeping about three days before he actually died and he never really woke up.

The terminology the nursing home used was “actively dying.” I found that expression to be quite ironic.

I was fortunate enough to sit with my grandfather during his final days. We did not talk. We did not sit and have a final heart to heart. He slept and I sat. Every three to four hours the nursing staff would come into the room to turn him onto his other side. This he did not like. At times he would stop breathing for twenty, even thirty seconds at a time. Twice I went to sit and put my hand under his nose to see if he was still alive. Twice he started breathing again and startled me.

As I sat there, part of me couldn’t help but think to myself… This is it? This, a small nursing room and a grandson on a recliner next to you? A woman across the hall who cannot sleep and who continually barks for help from the nursing staff. The bustling of a nursing home and the slow passage of time while your body prepares to die. This was it?

My grandfather was a mensch. There are no two ways about this. I understand how this may read. I understand that each of our relatives are important to us in ways that only those close to them can understand. I am sure there are some of you who might think I am just grieving.

But seriously, this guy was a fucking stud. From a young age, he was a global citizen. He was born in New York and raised in Singapore. As a child, he dined alongside the likes of General Douglas MacArthur. This, however meant nothing to him. He was a Huckleberry Finn type. You know, swimming and camping and jumping out of trees and breaking bones.

During World War II, he was commissioned by the U.S. Navy and became a member of Scouts and Raiders, a precursor to the U.S. Navy Seals. The Scouts and Raiders did things like train dolphins to place sticky bombs on the bottom of enemy boats. He and his team went on daily five-mile swims, sometimes hitching a ride with the occasional dolphin.

He was a family man. He helped to raise three beautiful children while also caring for a wife who consistently battled numerous medical conditions. He bought a big old house with a barn and horses and ensured his children had a childhood that we all would be envious of. Later in life, he became the grandpa who bought us huge LEGO sets and took us on tractor rides as we made our way down to cruise on his pontoon boat.

He was rich. He was never afraid to make money and never afraid to share it. He was content with what he had, which made personal success easy for him. People seem to like you more when you aren’t playing an angle. He achieved tremendous success professionally. He worked in the promotional products industry and was elected into the PPAI Hall of Fame in 1994. He took the entrepreneurial leap in 1979 and started his own promotional products company, which he ran until he sold it in 1997.

Money never dictated how he lived or prevented him from doing the things he wanted. He made it and he spent it and he gave it away. He used it as we all should, as a tool to make his life, and the lives of those around him, better.

He was a good man. He was a lifelong Rotarian. He volunteered whenever possible and worked to teach his children and grandchildren the beauty of sacrifice for others. His volunteering efforts were recognized on multiple occasions. He rang bells for the Salvation Army every Christmas. Throughout his life, he donated more than twenty gallons of blood. GALLONS. To him, volunteering did not need to be a gruesome event. It could be a fun way to connect with, and learn from, other people. As a result of his commitment to community service, in 2000 the Janesville United Way honored him with the Geraldine Hedberg Alexis Tocqueville Society Award, it’s most prestigious volunteer award.

He was generous. He gave often and openly. As his grandchildren, our Christmas presents often involved gifts that were not for us. He would make a donation in our name to a certain charity or buy a heifer (yes an actual cow) for a small family in Africa. Each Christmas was an opportunity for him to tell us a story and to continually show, by example, how important it is for those who have to share with those who do not.

He traveled the world. He visited five of the seven continents. His time in the Navy took him to remote islands in Southeast Asia. As a father, he often packed up the family for cross-country road trips. For his 70th birthday, he summitted Mt. Kilamanjaro, the highest peak in Africa. Later in life, he cruised the Atlantic with his second wife so they could take in the sights of Europe.

I mention this not to brag. I do not the need external validation to know that my grandfather lived a full life. I mention this for context.

This was it for my grampy?Me in a chair next to him while he actively died?

Here is a man whose life deserved a parade. He deserved to have the horns blown, the bells rang, the primitive drums sounded. This was it? If his life did not merit some form of grand recognition, whose did?

He died in the middle of the night, with my dad sleeping in the recliner at his bedside. My aunt, my dad and myself spent some time with him during the early morning hours while we waited for the funeral home to come and take his body away. There were no horns or drums. We played several songs on my computer; quietly, so as not to disturb the insomniac across the hall.

And then, he was gone. The funeral director came, last goodbyes were said and his body was wheeled out into the parking lot. Off to the University of Wisconsin Medical Center. My grandfather’s final donation. Always wanting to be an organ donor, and realizing as he aged that his organs would be of no vital use to anyone, he decided to donate his body to science. His hope was that some medical student would be able to use his body to learn.Like I said, a mensch.

I am writing this in part to pay tribute to my grandfather and in part to share the most important lesson my grandfather ever shared with me. A friend once told me that people die twice. First when they physically die and second when everyone who ever knew their name died. Call this my fighting stand to preserve the legacy of one Russell Burchard French.

In November of last year, shortly before I left for an extended trip to South America, I went to visit my grandfather. He had been declining for the past year and it was very likely that I may never see him again. As we were saying goodbye, I could see that he had a very earnest look in his eye. He wanted to say something and be sure that he was understood. This was not always so easy for him at this point in his life. As I bent over to hug him and stumble through a goodbye that implicitly hinted it might be our last, my grandfather stopped me. Clear eyed and straight-faced, he said to me: “I want you to know that I am ready to die. I know what the next step is and I am prepared for it. I do not want anyone to be sad when I am gone, because I know what is next. I am ready to die.”

This one moment, my grandfather’s complete acceptance of death, showed me everything l needed to know about how to live. He did not die kicking and screaming, grasping for all that might of been. He was content with the life he had lived. He was ready for the next step, whatever that may be. There were no stones left for him to turn. I realize now what my grandfather likely recognized long ago.

There was never going to be any grand procession into the after-life.

This was, and always is, going to be it. Once we are gone, the world will continue to spin. You will be here and then you won’t. And life will gone on without us. To understand that nothing in life is ours, that even our time is borrowed and will one day expire, should provide an incredible clarity to how we live. Our decisions in life, and our interactions with others, should be based on one simple maxim: “When it is my time to die, how will I look back on this?” I encourage anyone who reads this to take a lesson from my grandfather. Live now, while you can. This is always going to be it. Remember that your life, while meaningful, will never matter more to anyone else than it does to you.  So whatever it is you want to do, just go on and do it. And at the end of it all, when our time comes, hopefully we all smile and ride that final wave as peacefully as my grandfather did.

Those are annoying. Kinda like tourist traps. Wanna learn how you can dodge tourist traps when you are traveling? Drop your email below and I will send you my guide with 10 tips for better travel.