It’s a steamy Friday afternoon in Barranquilla, Colombia. We’re playing cards by our hotel pool. The game has ended in a tie, so we decide the winners would, as the above sentence indicates, draw cards.

Kyle takes the top card and Rhys, an Australian we had met just two hours earlier, the next.

They both flip over a 3.

“Ahhhhhhh,” we all yell. “What are the chances? Kill three cards and draw again.”

Kyle discards three cards from the deck and they each take another.

They show each other a pair of 8s.

We all start laughing. “No mames!!” Justin yells, his Mexican Spanish shining through. “Again, again!! Kill three and draw again.”

The game doesn’t seem to want a winner. We should listen to the universe. We should stop. We should let the game end in a tie. But what fun would that be?

Kyle kills three cards. He takes the top card and Rhys grabs the next. They flip them over at the same time.

We all jump up from the table and scream. We are laughing so hard we lose our breath. We are now in the one-in-a-million, probably one-in-a-billion range in terms of probability. For two people to kill three cards and simultaneously pull the same card not once, not twice, but three times in a row is nothing short of magical.

Part of me wants to stop. To end things in a tie and keep the mystery alive. Another part wants to keep going. It’s the part inside of us all that keeps casinos in business. The part that wants to see just exactly where the edge is and how far we can go.

We all settle down back into our seats, Kyle kills three cards and they each draw. Kyle draws an ace and Rhys a 3. Game over, mystery over. Kyle wins.

In the grand scheme of things, this story is insignificant. By the end of the weekend, it wouldn’t even make a “Top 10” list of stories from our trip.

But in a weird way, this story ended up mattering immensely. Not necessarily for the content of what happened, but for the reminder it would later serve.

As we walked away from the pool and began to get ready to party, I remember thinking how that might be the only one-in-a-billion moment I might witness the entire weekend. It was only later that I realized was a massive lie that would be.

“But of all the water’s secrets, he saw today only a single one — one that struck his soul. He saw that this water flowed and flowed, it was constantly flowing, and yet it was always there; it was always eternally the same and yet new at every moment! Oh, to be able to grasp this, to understand this!”

It was fitting our little card incident happened where and when it did. Barranquilla, Colombia. Carnaval weekend. An international gathering of people ready to dress out, drink up and get down.

Carnaval is a river of human energy. It sucks you in, tosses you around and spits you out. You don’t know when the river will pull you in, or for how long. One moment you’re standing, the next you’re dancing and screaming and throwing flour at people in fits of uninhibited, child-like joy. 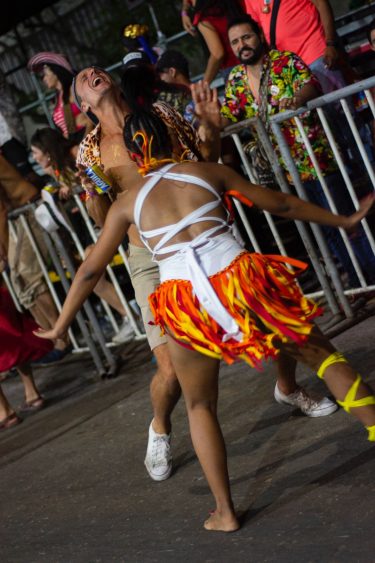 At any moment while walking the streets during the Carnaval, there are equal odds you:

The past is irrelevant. Where you came from, what brought you here, why you decided to come. None of it matters. You’re here. We’re here. Do you have guaro to drink? Do you want to drink guaro? Do you want to dance? Will you accept a little talcòn powder on your face? These questions carry much more weight.

An interaction may last as long as it takes someone to stop pouring or until the song changes. It may go on longer. You may fall in love. You may become fast friends who party together for the remainder of the night. But like the past, the future is also irrelevant. With so much life right in front of you, there is little time to think about how or where or when.

As I danced and drank my way through Barranquilla, I broke away from the rules of Carnaval and committed a cardinal sin.

I thought about our little playing card incident and questioned whether it was the only one-in-a-billion event I would witness this weekend.

I looked at our group, a mezcla of wandering souls from all over the world. We had Colombians from Barranquilla, Medellin, Bogota and Choco. We had expats from the US, Canada, Australia, England and Ireland. We had foreigners who had been living in Colombia for years and nomadic workers who were just passing through. We had locals from Barranquilla who had been celebrating the Carnaval since they were kids and paisas from Medellin experiencing the festival for the first time. We had people on sabbatical, some who had recently quit their job and writers traveling in-between projects.

I thought of the countless decisions that brought us together, to this moment in time:

“Should I travel to Colombia?”

“Should we go to Carnaval?”

“Should I go talk to this girl?”

“Should I let this guy talk to me?”

“Should we start a podcast?”

“Should I work with these two crazy gringos on their podcast?”

“Should we stay in this AirBnB?”

“Should I go to Carnaval this year?”

“Should I move to Medellin full-time?”

“Should I extend my flight by another few days?” 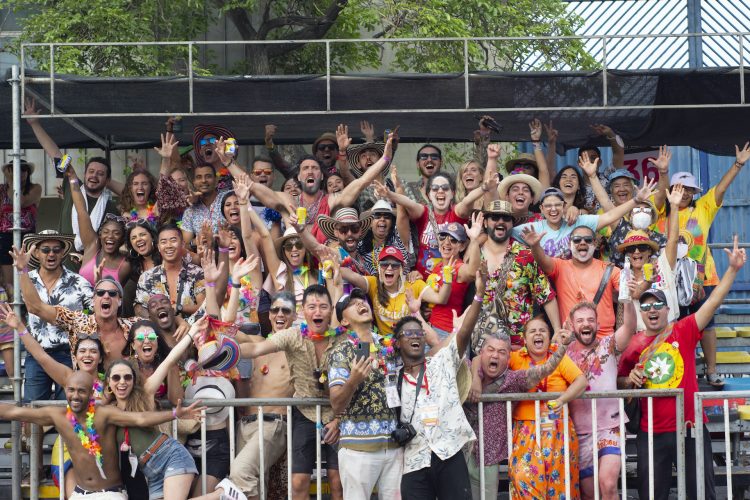 I looked down the streets and expanded my focus. I thought about the millions of unrelated, unconscious, seemingly insignificant decisions that brought everyone around me to this exact point in time. I stopped and smiled. Thousands of individual stories merging to creative a collective narrative much bigger than its individual pieces.

Constantly flowing, yet always there. Eternally the same and yet new at every moment.

To understand and remain conscious of this magical, improbable beauty is the stuff of mystics. Most of us will not sustain and appreciation for this beauty on a day-to-day basis. And that’s OK. But it’s good to be reminded from time to time. And this is what I think makes Carnaval so special.

A couple weeks after Carnaval, I was in a bar in Medellin talking with a friend. He was talking about how he hadn’t gone out in awhile and how it felt a little weird. I told him I hadn’t been going out much myself either. To which I immediately corrected myself by saying, “Well, I guess I did just get back from Carnaval.”

And he’s right. It is different. It is more than drinking and dancing and costumes and floats and parades. It is, as my friend Justin so astutely pointed out the other day, an appreciation for life. Of being here, together. Or, after the past two years we’ve all had, of being able to be here, together.

This appreciation can be seen in the costumes and floats as they pass by. Art reflects action. And the action is where the true beauty lies. The dresses and the costumes and the floats are beautiful, to be sure. But not as beautiful as thousands of individual decisions by thousands of unrelated people to take the time to dress up and come together to build a float. Not as beautiful as the collective decision by a group of misfits from around the world to come together and make the most of life for a little while.

You can feel this appreciation from time to time. It doesn’t happen often. You’re usually too busy dancing or drinking or screaming to notice. But every once in awhile the river thrusts you forward into a (metaphorical) rock and, in a mist of spray foam, Aguila Light and talcon powder, you are momentarily given a chance to stop, step back and say to yourself:

Oh, to be able to grasp this, to understand this!

The boxes are below, you know what to do.