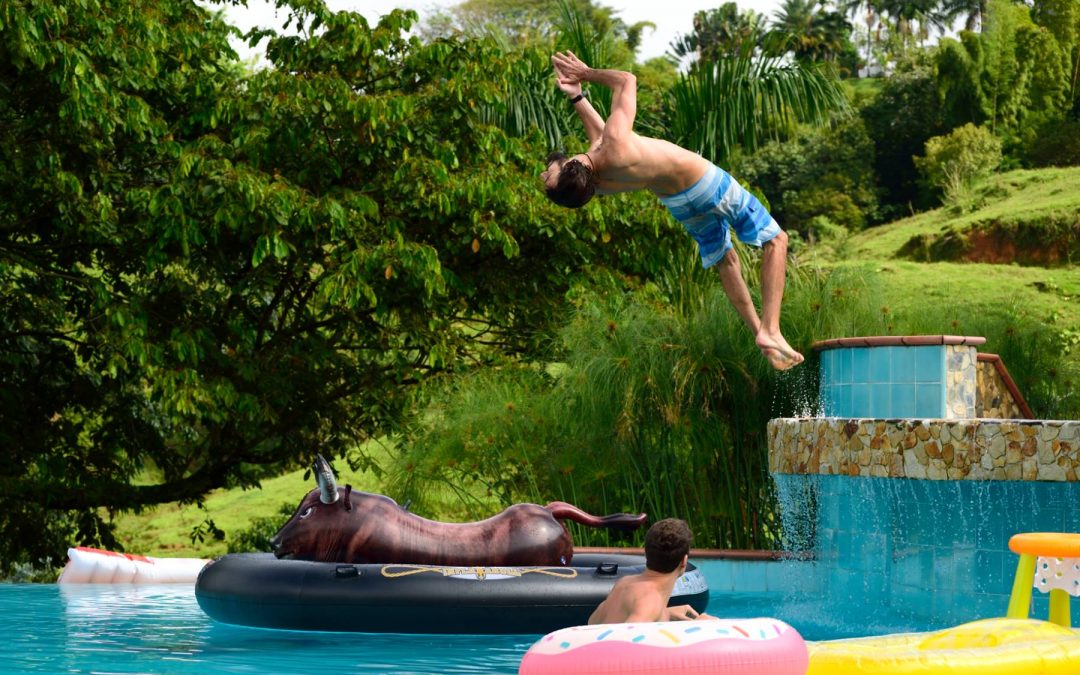 “Sometimes you gotta throw yourself in the deep end.”
Sam Goody

This one is for The ‘Tucky.

When is the last time you flipped? Not a house, not a cup and not your lid. I am talking about a gymnastics style front or back flip.

Recently, a group of friends and I went to a trampoline park in Medellin. This park had it all. It had trampoline dodgeball, basketball and soccer areas. It had Olympic-style trampolines and a trampoline obstacle course.

The park also had a giant air (giant air blob) that ran perpendicular to two large trampolines. The idea was that you could leap off the trampolines in the direction of the air cushion, attempt whatever stunt came to mind, and land without worrying about being injured.

As we approached the giant air bubble, we watched several kids, none of them older than seven or eight, leaping off the trampoline. They leapt and flipped and floated down into the inflatable sanctuary as if it were nothing.

We all talked about going for the flip. How hard could it be? We had trampolines and air cushions. If ever there was a safe place to flip, it was here.

And then, something interesting happened.

One by one, we leapt onto the trampoline, sprung forward to flip and…. more than half of us bailed. I was probably the biggest chicken of the entire group. I would take a big jump, leap forward and fly like an awkward giraffe, shoulder first, into the air cushion. It was embarrassing enough to be the only parent-less group in the entire park. To have Colombian seven year olds snicker at you as you rolled off the air cushion was more than I could handle.

I knew there was nothing to fear. “Air cushions and trampolines,” I told myself. I watched the kids flip time and again. “If these little fuckers can do it,” I said to myself, “so can you.” I watched other friends leap and flip and land safely. I knew my risk of being seriously injured was almost zero. And yet, I would go back and leap and jump and nothing would happen. I couldn’t do it. I probably ran and jumped and sprung and didn’t flip at least three to four times before walking away.

Eventually I came back to the air cushion and landed a successful front flip. I went onto land many more that day, including two or three on the Olympic trampoline. It’s a rather anti-climatic end to the story, but I was proud of myself.

Landing a flip for the first time since I was thirteen reminded me of a couple things.

First, I had forgotten how uniquely unnerving it is to flip. Your world is literally turned upside down. For a brief moment your perspective is changing too quickly for you to know where you are. You do not really know where, or how, you are going to land.

Second, I remembered that to successfully land a flip, the key is complete and total commitment. You must leap and stick to your decision to flip without knowing for certain how things are going to end.

This little trip down memory lane reminded me of a close friend. Let’s call this friend Kentucky.

Kentucky is one of the most impressive people I have ever met. He is a pure soul that is equal parts adrenaline junkie, entrepreneur and fashion icon. He has built a six-figure business that requires him to work about three to four hours a day and he did this while living and traveling in close to two dozen countries. The ‘Tucky, as we affectionately call him, is a human magnet at social gatherings, always finding his natural place as the life of the party.

Kentucky isn’t the smartest person in a lot of the rooms he walks into. Nor he is the most organized. In fact, if you want to lose something, just give it to the ‘Tuck. He is plenty smart and plenty disciplined, but these aren’t the main reasons for his success.

Kentucky is successful because he does one thing better than 99.9% of the world.

Not just physically, but literally. He is not afraid to leap into new countries, relationships, friendships or business ventures. He leaps without pause, preconceived notions or any sure idea of how things will turn out. The ‘Tucky is just there, ready to flip when you are.

He finds incredible women because he is not afraid to approach them nor to commit to them. He is successful in business because he has no doubts about taking on projects that might overwhelm other people. He has friends all over the world because he is not afraid to backflip headfirst into new relationships. He has the best stories because he has the courage to visit the most interesting places. His confidence in himself, in other people and in the world as a whole, is unshakeable.

Kentucky does not land all of the flips he takes. Far from it. Like any other person, the ‘Tucky bellyflops often. But a bellyflop ain’t no thang if you continue to flip.

And because he continues to flip, because the ‘Tucky continues to leap and have faith in the world without any certainty in how he’ll land, he succeeds.

The Colombian children – the aforementioned ninjas who flipped so effortlessly – they weren’t better at flipping just because they were more nimble. Children, in general, have less fear than adults. They haven’t been taught fear yet. They haven’t had as many negative experiences and they haven’t been told all the things they cannot do and why they cannot do them. They just go for it, blissfully ignorant of the consequences. This fearlessness is what allows children to make friends faster, learn quicker and generally live happier lives than adults.

Now, there are a couple important notes on flipping. First, I do not think that you should be continuously flipping. To do so would put yourself into a state of constant confusion and chaos that would get you nowhere. Second, some flips will be easier to land than others. For example, it will be easier to approach a stranger in a bar than to move to Morocco. It is a good idea to prepare for bigger flips by first attempting smaller ones. Lastly, you should not flip randomly and without thinking. Even the ‘Tucky will take the time to make sure the water is deep enough before he dives.

All that being said, sometimes in life you just gotta go for it. There will always be reasons why not to do any one thing. We can justify our fear through excuses, or we can trust in Bob Marley’s golden rule that “Every little thing is gonna be alright,” and just do it.

Because you know what? Things do usually turn out just fine. We flip and that’s a bit scary. But then we land, sometimes on our feet and sometimes on our ass, and we look back and think “Well, that wasn’t so bad.”

Change requires change. You cannot have the life you dream about if you continue to live as you do right now. It is impossible. It is literal insanity to expect change without taking action to change.

We can all learn a lil’ something from the ‘Tucky.

We can stand on the ledge of life and wait for the perfect moment that is never going to come, or we can close our eyes, bend our knees, tuck the shoulders…

Those are annoying. Kinda like tourist traps. Wanna learn how you can dodge tourist traps when you are traveling? Drop your email below and I will send you my guide with 10 tips for better travel.