Why Not Skip College?

This is a post for any high-school or college-aged readers who are interested in doing something other than attending college.

Links to the other articles can be found at the end of this post. For anyone keeping track, this is numero uno.

To ANY 18 year old who reads this and who doesn’t have a clue about what they want to do with their life, allow me to be the first person to tell you that this OK. You shouldn’t. Most people don’t. Even the adults who seem to have it all figured out still don’t have all the answers. Don’t let the world convince you that you should know what your path is going to be.

Relax, breathe and enjoy being young.

It only happens once.

“I have never let my schooling interfere with my education.”

I recently read that good writing is all about telling the truth.

So I’m going to start with the truth.

And the truth is that this piece was difficult for me to write. I wrote it five different times before settling on the finished product you see here.

I graduated from college. I know that I am a better, smarter person for having gone to college.

I know that if I had not gone to college my life might have taken a much different route. In addition to the growth I experienced while in school, some of the most formative experiences in my life — moving to Korea to teach English, for example — would have been impossible without a college degree.

I get how important a strong university system is for our country. I am aware of how the advancements that come from universities push our society forward.

But, if I am being honest, none of this has helped to kick my strong inner urge to start walking into high schools around the country with a megaphone and announcing:

It’s just getting out of hand. The costs. The student loan debt. The number of kids who go to school because they can’t imagine another option and then drop out two years later with $40,000 in debt.

We have to take colleges off the pedestal. We have to stop brainwashing young people with the idea that college is the way, the truth and the light.

Colleges are great, but they ain’t for everyone.

Here are 3 reasons why I think that ALL high school graduates should skip college, at least for a year or two, before deciding to go:

#1: College has become too expensive

This shouldn’t be news to anyone, but in case you didn’t know, college is a tad pricey.

Americans currently owe more than $1.56 trillion dollars in student loan debt. This is $521 billion more than the total US credit card debt.

Colleges have become a hustle. They are the wolf of capitalism disguising itself as the innocent lamb of higher learning. And this wolf feeds itself by taking large amounts of money from naive young people.

Wanna see what a greedy wolf looks like? Below is a chart showing the increase in tuition costs over the past 20 years: 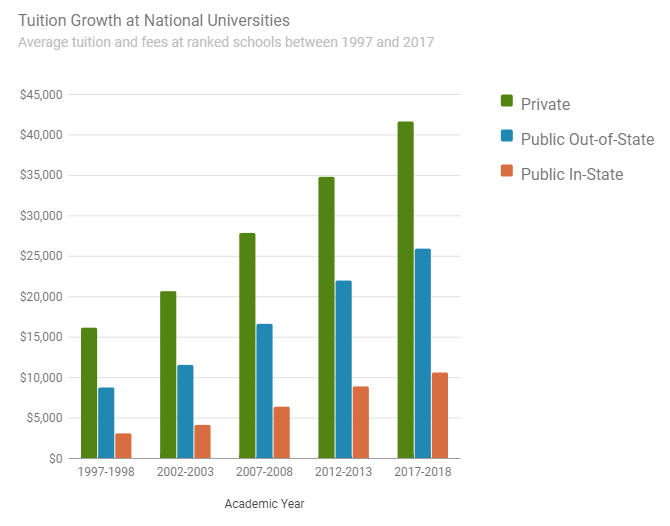 Quite the upward curve eh?

Tuition costs at in-state universities have gone up 237 percent in the past 20 years.

237 effin’ percent. And these are at public, in-state schools. You know, the schools that our taxes pay to support.

For a little perspective, the total consumer price index inflation increased by 52.7 percent over this same period of time. This means that college tuition costs have gone up at a rate of more than five times the national rate for comparable goods and services.

So don’t come at me with “this is an inflation problem.”

This is not an inflation problem. This is a “a college-has-gotten-way-too-damn-expensive problem.”

And no matter the situation, when you put $40,000 worth of chips on the table, questions begin to change.

In this case, the college question changes from “Is college beneficial?” to “Is the juice worth the squeeze?”

While it is nice to romanticize about college and the idea of young people prancing about in their search for a higher purpose, I think that we should speak frankly with one another. And frankly, the majority of people attend college because:

We make high-interest, unaffordable loans easily accessible and then tell young people, “Go ahead and sign on the dotted line. Then go find yourself.”

Which leads me to point #2…

#2: College isn’t necessarily the best place to find yourself and/or a job

“But,” some of you might be saying, “college is great because it gives young people a safe place to figure out what they want to do with their life.”

One of the great misconceptions about college is that it is a great place to go to figure out what you want to do with your life.

Only about 60% of students who enter college actually finish. And those that do graduate take about 6 years to finish what is supposed to be a 4 year degree.

This article in the Harvard Business Review is a synopsis of a study done for the book There Is Life After College. The author of this book, Jeff Selingo, interviewed more than 750 recent college graduates and analyzed their career paths after they graduated.

Among his many findings, one in particular stands out.

Of the students the author labeled as “Sprinters” (these were students who were quick to launch successful careers after graduating college) 64% of these “Sprinters” knew what they wanted to study before they enrolled in a four-year university.

On the other hand, students who entered college “undecided,” often wandered through their undergraduate years and took much longer to successfully launch a career upon graduation.

Part of the reason that students take so long to graduate is that they change majors. They transfer schools. They drink and party and try to forget about the fact that they will eventually have to grow up.

And all the while, the juice on their student loans is running…

What’s even worse is that many of these same students graduate and then take on jobs that are either:

Because the market is too saturated. Everyone and their mother is going to college.

Which leads us to today’s word of the day:

This issue of graduates taking jobs that do not really require a degree has become so common that researchers have coined the term “underemployed” to describe college graduates who are working in a job that does not require their degree.

In 2012, 44% of college graduates worked in a job that didn’t require a college degree

And you wanna know who is underemployed most often?

Students who enter university undecided about what they want to do.

#3: The internet is breaking the educational system 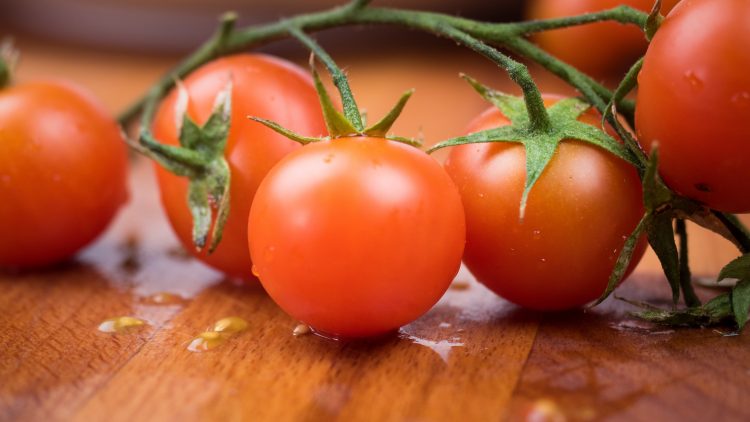 Photo by Andrea Riezzo on Unsplash

Imagine you live in a small town.

In this town, there is only one market that sells tomatoes. This market’s tomatoes are expensive and the market itself is difficult to get to, so going there requires a significant investment of time and money.

But the tomatoes are delicious and this market is the only game in town, so everyone sucks it up and goes and pays.

Then one day, there is a big change and several other markets around town begin to sell tomatoes. The tomatoes are a little different, but they are just as good and cost a fraction of the price. And not only are they cheaper, but the other markets are easier to get to because they are closer to the town.

Then, in response to this sudden increase in competition, the original market decides to… raise the prices for their tomatoes.

Would you go back and buy more tomatoes from the original vendor?

Not. A. Fucking. Chance.

This is exactly what is happening right now with education.

We are smack dab in the middle of the Information Age, a time when we have more access to knowledge and information than ever before, and universities (society’s vendors of knowledge) are raising their prices?

Colleges got too greedy. And now the ever-equalizing hand of the internet is about to bitchslap them down a few pegs.

If you are a student thinking of going to school, take a little time to step back and look at the writing that is already on the wall.

There is a reason why dozens of colleges in Massachusetts and New England are suddenly closing.

There is a reason why the online learning / self-education industry is exploding in growth.

There is a reason why companies like Apple, Google and IBM no longer require college degrees for many jobs related to writing software and programming.

There is a reason why the United States government is investing large amounts of money into different apprenticeship programs.

Not only is the college curriculum out-dated, but the job market is changing quickly. It is likely that a lot of the jobs that are in the highest demand in 10 years won’t even require a college degree.

The Bureau for Labor Statistics predicts that employment for software developers, one of the many computer based jobs that doesn’t really require a college degree, will grow by 24% between 2016 to 2026. This is MUCH higher than the average for all other jobs.

Anyone considering college should take a moment to step back and think, “Wait, will I even need a college degree in 15 years?”

Isn’t it possible that in 15 years colleges are nothing more than specialized schools for certain professions (medicine, law, engineering etc..) and that the rest of the population learns via online courses and YouTube?

Remember that he internet is undefeated.

Print media. TV. Film. Music. Commerce. The internet has come in like a young, Mike Tyson and hammered these industries beyond recognition.

Education is next. In fact, education and the internet are already in the ring. The bell has rung and they are slowly pacing around one another. It is only a matter of time before things change.

It is important to make a clear distinction between school and learning. While schools require learning, learning does not require school.

I am 1000%, two hands in the air, all-in on learning. There are few things in life as important as the consistent search for knowledge.

But there are ways to learn that don’t involve college.

Again, if you are in high school and you are uncertain about what you want to do in life, please know that it is OK to skip university. Even if only for a couple years.

Work. Travel. Live. Time is what you need, not debt. Time to grow and make mistakes and experience the world.

Trust me, it is better to start late with a direct purpose than to dive in early with no direction at all.

And now, some alternative options:

Part 3: Why Not Apprentice?

Part 4: Why Not Teach Yourself? (under construction)

Part 5: Why Not Hustle? (under construction)